During the month of December, there are many celebrations from various cultures, faiths, and events to remember.

Many of these are linked to the winter solstice, which has been celebrated throughout history as the “rebirth of the sun.” The natural rotation of the earth was not known in earlier times, so the shortest day of the year (December 21) and the gradual lengthening of days afterward took on a meaning that has largely been forgotten.

We don’t know the exact date of the birth of Jesus, but over time, his birth was also associated with this “birth of the sun,” or many say “birth of the Son.” Early Christian celebrations were generally observed on days that were already holy days, such as the solstice, to help make the transition to Christianity.

…Shab-e yalda, the rebirth of the sun, was an ancient Iranian ceremony that reflected the basics of goodness and light against evil and darkness. (from Suite 101 – see link)

There are many other interesting days of celebration listed on that last link, including The Festival of the Wild Women!

Because I spent many years in Arizona, and Tucson in particular, one of my favorite December traditions is Las Posadas. This procession is a reenactment of the trip Mary and Joseph made from Nazareth to Bethlehem. A group dressed as angels, shepherds, and the holy couple go from house to house seeking shelter. The word posadas means “lodging” in Spanish. At each home, these “pilgrims” are served various foods, including tamales.

One of the blogs about blogging I read is ProBlogger. That’s a mouthful, isn’t it? This week, there was a challenge to respond to seven categories. I decided to take part, mostly because it requires some thinking about my posts in the past and where I’d like to go in the future. Here are the seven categories:

1) My first post.
I started this blog as a record for myself only. I was trying to make soil from compost and other materials in order to get something to grow on this acre of rocky lava we call a`a.

2) The post I enjoyed writing the most.
The reason I enjoyed this post is that it is about a special family event I wasn’t able to attend. My first granddaughter got married in October on the mainland and I couldn’t get away from teaching to fly over. Also, I didn’t take the pictures, but it showed several of my children and grandchildren. Needless to say, I shed a few happy tears as I put it together in a post.

3) A post which had a great discussion
I’ve written about lilikoi (Passion fruit) several times and each post brings more discussion than anything else I write about. Mainland readers probably don’t have a clue what lilikoi is, so it’s mostly Hawaii residents who get into great discussions about this fruit with an unusual flavor.

4) A post on someone else’s blog I wish I’d written.
My brother writes a blog that is way more popular than mine, and he tells of great things to do in and around the Tampa Bay/St. Petersburg area. Like me, he writes about his travels. He and I had just been to England, and we both loved London. I absolutely love this post he did all in black and white photography. It gave me an entirely new perspective to London.

5) My most helpful post.
This post was about a little book that has guided my life and the lives of others over and over. If you are looking for a way to set goals and objectives for the next year, this is the book that will help you.

6) A post with a title I am proud of.
I think the reason I’m most proud of this title is because it represents several decades of waiting to have my book of the same name published. It is about a book I used in my psychology practice and with students. It can also be a self-help book by exploring some hidden meanings in your life.

7) A post that I wish more people had read.
This was posted to honor AIDS Day, and invites us to look at our lives and how we respond to unexpected events in our lives. AIDS awareness is growing, but still not enough.

It took me a while to decide on each of these categories. There are so many posts that would fit into each category. After looking at these seven posts, I get a good sense of where my pleasures reside in writing this blog. My topics have evolved quite a bit over the past two years, and on an unconscious level, I think I have been going in the direction that most suits me best.

I hope you are finding these rambling posts helpful when you garden or cook or travel or reflect on life.

Aloha!
Feral Fables, my newly published e-book, will be available for a special promotional price of $2.99 until August 1, 2010. Go here to to buy or sample Feral Fables. Use the promotional code “SL25S” (not case sensitive) at checkout.
Mahalo! (Thank you!) 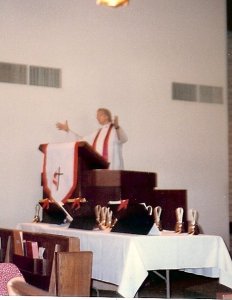 Some of you may know that not only am I a gardener and a college psychology instructor, but I am a retired United Methodist minister. When I served a church in Tucson AZ, many of the funerals I conducted were victims of AIDS.

Because of my close connection with this population in my church, I have a special place in my heart for those who suffer from this disease. It is in honor of those who have the disease, as well as in memory of those I have buried, that I write this blog.

There is a special dance from the early church community called the TRIPUDIUM. I learned about it nearly twenty-five years ago when I took a workshop from Doug Adams, who was a professor of religion and the arts at the Pacific School of Religion.

I had no idea that Doug had left this earth until I looked him up on Google. I’d like to give you two other websites that will give you a sense of who he was. According to these articles, the memorial celebrations outdid Doug in creativity.

The following information on liturgical dance is something I learned from Doug that will stay with me always.

TRIPUDIUM actually means “three step” or “jubilate” in Latin. Later, dance in church was suppressed as being too sinful, and thus it came to mean “the Jubilation.”

It was a style of processing to church, symbolizing the progress of not only the individual, but of the whole church and community.

In other words, the SETBACK becomes part of the dance. It isn’t outside the rhythm.

We don’t want to include the back step in the dance. But it’s all part of the dance! It gives us a more optimistic spirit, helps us see setbacks in the context of life, of ongoing progress.

Another interesting fact is that this dance was not done in single file, but in processions with many abreast with arms linked, row after row. It is done in community – not alone. It is a deliberate moving forward.

The Greeks believed in afterlife, so they danced a ring dance to make safe passage for the deceased. The Greeks appreciated dance as an aesthetic experience. Everything was a dance for them – victory processions, weapon dances, displays of power, ball games, wedding processions, and funeral processions!

The early Christians drew on this custom. They circled the grave with lively funeral dances to celebrate the person’s birth into everlasting life. Rose petals were dropped on the open grave, as they sang, “Ring Around the Rosie…Ashes, ashes, we all fall down.”

When life and mortality seem difficult, I invite you to put on some music and dance the Tripudium, shouting out three signs of hope for every setback.