I’m just a baby in blogging years, but here I am at Post #16 – sweet sixteen! I think it’s time to do a brief update on my progress. If you look back at my previous posts, you’ll have something to reference when I talk about certain plants and animals.

Chickens: A few loud cackles a couple mornings ago informed me that eggs were finally being laid. The girls are doing their job, and I had the first eggs for lunch that day. They are small, but I had read that might be the case with the first few eggs. I had just started integrating layer pellets into their food this past week, and the nesting boxes were ready for them.

I had also read that it might be necessary to put fake eggs in the nesting area to let them know the exact purpose of the nesting box and material. They don’t have a lot of places to hide eggs in their run, but I didn’t want to have to crawl in there to rescue eggs.

So far, most of what I gather are small brown eggs from the Rhode Island Reds, but one of the Araucana had found her way into the nesting box by this afternoon. In this picture, you can see the difference between the brown eggs and a light one that I think is from an Araucana. Their eggs can be all shades and colors.

Water Tank: I’ve been able to maintain a fair amount of water this year. Last year, I ended up buying 4,000 gallons (a water tank full) by this time of year. The year before that, I had to buy two loads (8,000 gallons). A few threatening hurricanes have blown a couple of residual rains our way. If we haven’t had a heavy rain, we’ve at least had misty days.

I still have 50″ of water in the tank, which is wonderful! Also, with the rains, I haven’t had to water my plants, which helps to conserve my supply. I keep the chlorine and pH at the proper levels. I had the tank vacuumed toward the end of June. This was the first vacuuming of algae off the bottom of the tank since I moved in two years ago.

I learned a trick from friends about how to put bicarbonate of soda in the tank. I’d been pouring it in around the edge, but they dump an entire twelve-pound bag of soda into an old pillowcase, tie it up with a line, and toss it into the tank. Gradually, it seeps out into the water and gets mixed in to keep the pH between 6.8 and 7.0.

I have a net filter where the water runs into the tank from gutters on both the house and the shed. There has been a fair amount of debris caught in the nets lately, which goes into my compost pile.

Garden: I have a fresh crop of beets coming up. I couldn’t wait, so I bought fresh beets at the Na`alehu Farmer’s Market last week, along with more corn.

My Japanese pumpkin (kabocha) is growing, but no matter how many seeds I put out, only the one vine has really done anything so far. It’s bearing, however, and has plenty of blooms on it. 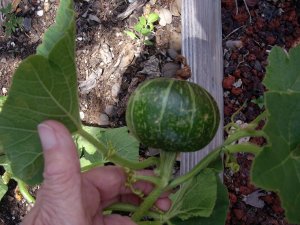 The Hawaiian Pepper seeds I’ve put out aren’t doing anything yet, but the pepper plants I bought at the nursery are producing nice little peppers. They are hard to see here – hidden by the leaves and blending into the fig in the background. 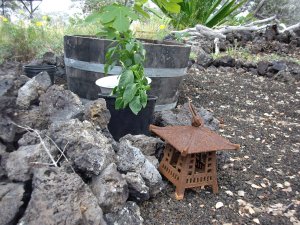 I have a few figs getting ripe, enough for a one-person snack. 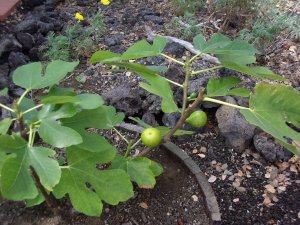 The herbs that burned back from the sulfur dioxide in the vog have started to come back and fill out. 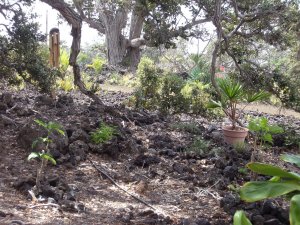 At one point, the rosemary spread out over a three-foot area. The sulfur dioxide got to it and here is what’s left after cutting back the dead portion. I hope it regains strength and vigor. 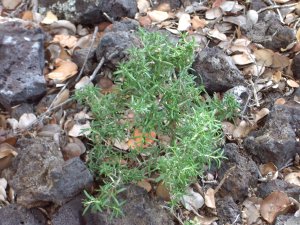 I know most people would love to keep their mint from spreading so far out and completely taking over their garden, but I feel very lucky to have this little patch growing. I wonder how mint will taste with those word I may have to eat someday?

The coffee trees are about a third or less of what they should be by now, but at least they continue to put out new leaves. If I’m lucky, they might make it enough for me to brew at least one pot of coffee someday. 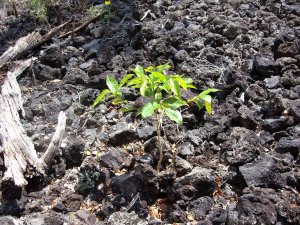 All my triangle palms have new shoots and are looking fairly healthy, in spite of the bad air. I have to add iron to them periodically. 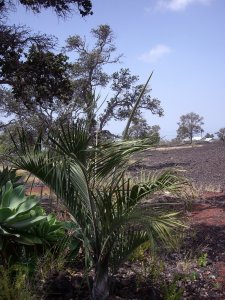 I have several small triangle palms on my front steps ready to go in the ground. I’ve been lining my driveway with triangles.

Most of my protea have been totally lost, although I have a couple of banksias that are still growing. You can see that this one has a little of the sulfur burn on it.

The Barbados Lily has put out lots of healthy leaves. You can computer this to the picture taken 4 weeks ago. 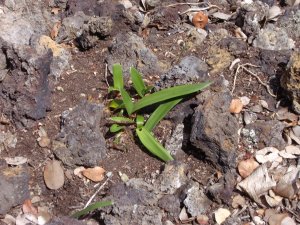 The peanuts are growing! You can see a couple of tiny yellow blooms hidden among the leaves. In the Deep South, where I spent many years of life, and where my father grew up, we called them “goobers.” There was the “goober” man who walked the streets selling his peanuts, calling out “Goooooobers! Goooobers for sale!” That also reminds some of us of the peanut vendor at baseball games. I grew up loving the St. Louis Cardinals as a kid.

The lilikoi (passion fruit) is sending out feelers, reaching for the fishing line I’ve put on the side of the shed.

I get impatient, however. It feels like everything should be growing at a much faster pace. Any soil or “pig dirt” I put on my plants just sifts down into the cracks between the lava rocks. I add more, it rains (or I water), and I lose that much more. It’s a slow process, but certainly a learning experience.

In spite of the hard mix of sulfur dioxide and unforgiving lava, some things seem to get more beautiful by the day. These pink plumeria were just small cuttings this last spring. I’ve put them out all over to provide a bit of color – a sweet smell to end this post.